In 2008 I was invited to a Unix conference in Athens. From the airport I took a taxi to my hotel at a cost of 30 euros (this will be important later!). After checking in at the hotel I decided to take a taxi to the university. I arrived at my destination without a problem, but I still can’t understand why the taxi stopped and picked up a woman, then deposited her a few miles away before continuing the route to the university – no explanation was offered. Talking to my friends, I was told that I was charged the right amount for the trip. Very strange – I’ve spent many a sleepless night pondering that mysterious journey!

The conference was great, the audience very friendly. I was able to visit some of the old sites, as you can see from the pictures. 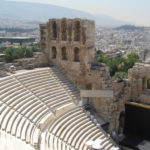 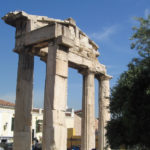 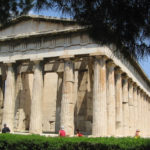 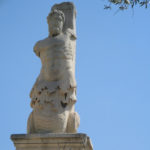 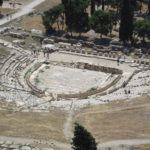 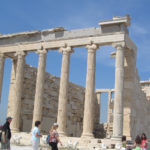 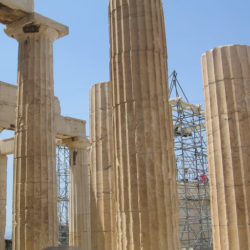 But all good things come to an end, and it was time to leave for Bucharest for the eLiberatica conference. I had to be at the airport at 6 am so I asked the hotel reception to book a taxi for pick up at 5 am. The longer my taxi took to arrive, the more stressed I felt. At long last it came. The driver was a middle-aged man with no striking features and his English was pretty good. He first told me not to worry – we would get to the airport on time. We may have made it on time but without a worry was another matter. As soon as the car started he lit a cigarette and had a swig of coffee, driving with one hand on a very busy road. Then his mobile rang! Still driving like a lunatic, he answered the phone then dialled a number and talked for a few minutes. During the journey he made at least 3 phone calls, drank coffee and water, and smoked three or four cigarettes. At long, long, LONG last we made it to the airport, the driver perfectly content and me rather green – I was shocked that we made it to the airport in one piece and grumpy. But it wasn’t over yet…

I retrieved my suitcase, ready to pay. “How much do I owe you?” “60 euros,” I was told. Since I’d only paid 30 euros on the way in, I couldn’t understand the 100% increase. I offered 30. He then asked if my company was paying. I said, “Yes, of course,” which was followed by the best response I could have imagined! With a big smile he just said, “60 euros – a little for you, a little for me”. In a bad temper, still nauseous and imagining my plane leaving without me – in short, in no mood to argue – I threw 30 euros at him and rushed inside the building. Nobody was going to spoil my visit to Romania.