As discussed previously, I was now in Sofia. After the traumatic tooth experience, I was finally ready to meet the organizer of the WebTech Conference. Once technical details had been discussed – had my books arrived, when could I set up the display table, etc., Bogomil Shopov took me to the centre of Sofia for sightseeing before saying, “We’ll meet here around 4 pm, then we can walk to the venue to set up for tomorrow” – then departed. So I was left alone in this new city. I was excited and ready to take millions of pictures (please note – I did not say I was good at photography). For example: 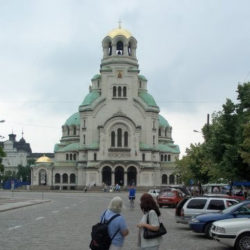 St Alexander Newski Cathedral: This newish cathedral is in the Neo-Byzantine style. It was created to honour the Russian soldiers who died during the Russo-Turkish War of 1877 1878, as a result of which Bulgaria was liberated from Ottoman rule. I discovered later that the basement was a museum for the oldest and most beautiful icons – not the cheap stuff you find on street corners. 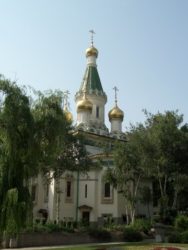 The Russian Church (Church of St Nicholas the Miracle-Maker):  again, a newish church that was built next door to the Russian Embassy and the then Russian Community – a very beautiful church with its golden onions and elegant architecture. But SHOCK! The interior is black! I am told that the continuous use of many candles blackened the walls and ceiling. All the churches I visited in Bulgaria are very dark. 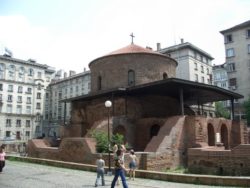 The Church of St George, an early Christian red brick rotunda with enormous walls of 1.4 metre thick. Considered the oldest building in Sofia, it is situated among the remains of the ancient town of Serdica. Originally a Roman bath or serving a Roman religious ceremonial function, the rotunda kept changing its role – Christian temple, mosque and now a tourist site with some Christian links.

Sofia is not just about churches (which, by the way, did not manage to make me religious), there are also some other interesting sights such as: 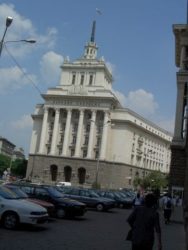 The Communist Party House: I think most USSR countries had such a building. In Sofia, it was used until August 1990 as the seat of the Central Committee of the Communist Party. It was set on fire during the Summer of 1990 by crowds protesting against the Soviet rule. On the outside only one thing is missing… the red star! It was removed after the collapse of the communist party and the newly acquired freedom of the people of Bulgaria. It is now home to the Museum of Socialist Art. 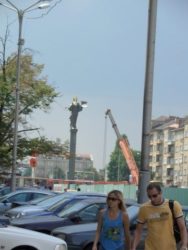 As you can see from this very short post, Sofia is a very interesting city to visit with lots of history and culture. There is a lot more to see but for the rest you will have to go and see for yourselves. Personally I have been going almost every year and every time I discover something new and enriching.

Going back to my story – I had to go back to meet with Bogomil. That’s when I realised that the street signs were written in Cyrillic and my map was showing Latin script. Ouch! Panic! How do I get back? Fortunately, I had a pocket book showing the Cyrillic alphabet vs. Latin and somehow, translating letter by letter, I managed to get back to the meeting place. Since then both writings appear on the street corner so I suppose I was not the only foreigner that got caught.