The 12th edition of FOSDEM, the Free and Open Source Software Developers’ European Meeting, took place on the week-end of 3rd and 4th February. It’s now an established, recognised yearly event that attracts participants from all over Europe, and even the world. Let’s take a look at how it came to be. 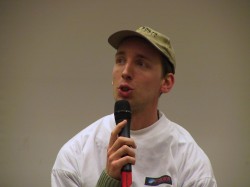 Raph as seen by David Wheeler on http://www.dwheeler.com/essays/fosdem2002.html

In 2000, the Free Software and Open Source movements were getting growing interest from the corporate world, and commercial event were organised, amongst others in Paris. I visited those events, and although there was space reserved for the community, I felt these events lacked something. It was not the right place for hackers to meet and learn from each other. And that was the start, end of November 2000, of a great adventure that caught me by surprise. Before I realised it, I had people around me enthusiastic about the concept and there was a website and a mailing list set up. But what would the event be called?

OSDEM: Open Source Developer’s European Meeting (it would later be renamed to FOSDEM to make justice to the Free Software movement). The date was also set: 3 and 4 February 2001, just after the commercial Linux conference in Paris, in the hope to attract visitors and, who knows – speakers. But this meant that there were only 2 months left to organise the event!

The good news accumulated: Richard Stallman accepted to come and talk after his visit to Paris, Renaud Larsen from VA Linux enthusiastically supported the event and brought sponsoring and speakers (for example Rasterman and Jeremy Allison), Damien Sandras, of Ekiga fame, joined me in organising the event, and others also brought their support. Those were crazy weeks. Before you organise your first event, you can hardly imagine all what’s needed: booking hotels, finding the event location, ensuring you have the needed facilities, providing the network, looking for and inviting speakers, deciding on their talk’s topic, updating the website, promoting the event, etc…

When the great day arrived, we didn’t know how many people to expect.

We expected quite a lot of people, but not the 600 that did show up!

The organisation had its quirks, but everybody present was patient and ready to help if possible. Spontaneously, a team formed to welcome visitors and help people find their way. This was the beginning of what would become the FIT: the Fosdem Info Team.

Organising a great event is cool, this needed to be repeated. But confirming a success is hard, as we experienced for the second edition. VA Linux was not sponsoring anymore, and new sponsors were needed. These were hard to find, bringing some disappointment. My first mails to O’Reilly went lost, leaving me without sponsors! I still remember when I finally got Josette, O’Reilly UK Ltd, on the phone. Before calling her I said to colleagues: “This is the last chance to have a second edition…..”.  Luckily she accepted that O’Reilly supports the event, and the ball was rolling again. Since then, the event organisation improved continually (a traditional pain point was the Wifi network, taking 3 or 4 editions to be fixed) and the event popularity grew constantly.

The energy of FOSDEM

This year was the first time it was difficult for me to go to the event as a visitor (I left the organisation in 2009). I didn’t feel at my place as a visitor. However, the energy you really feel at FOSDEM got me over it. The energy even gave me an idea of what I could bring to the community. I hope you’ll hear about it soon, but more importantly, I encourage you to be present at FOSDEM 2013, and I hope you too will feel the energy and decide to bring something to the wonderful community of Free and Open Source Software Developers!