Helen Schell will be exhibiting once again at the Newcastle Maker Faire on 26th-27th April at the  Centre for Life. 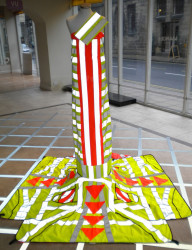 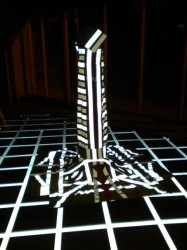 She will be showing her latest creation the Beam Dress, which was created for Light up the Streets in Lancaster, UK, last winter.  It is one of a series of Smart Materials dresses exploring light reactive materials. In December, 2013, it was also displayed at the Mattereality Conference at the Scottish Museum of Modern Art, Edinburgh.

With the Beam Dress, her recent short film; UN-Dress with be also screened. This is a continuation of her previous creations that you may have seen at other shows. UN-Dress was a ball-gown made from dissolvable thermoplastic and was created for the Undress: Redress project in 2012. It was filmed, dissolving, during a performance at the Whitley Film Festival last year. 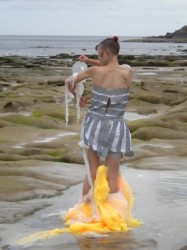 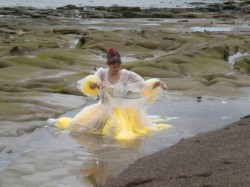 This dress was commissioned by Science Learning Centre North East as part of The Fashioning Science project.

This project also included, The Dazzle Dress: This was made from Hi Vis safety jackets creating a futuristic and unusual ball-gown. It has been exhibited at the London Science Museum, Newcastle Maker Faire and Durham Cathedral. The project was short-listed for the North East Culture Awards in 2013.

Helen Schell is a visual artist and ESERO- UK Space Ambassador who specialises in artworks about space exploration and the science of the cosmos, and is based at NewBridge Project,  in the north east of England.

She organises exhibitions, residencies and children’s education projects by using art and craft techniques to communicate science. Through diverse projects, she invents inclusive activities to get participants interested in space and future technology. She makes large mixed media art installations and paintings, often described as ‘laboratories’.

In 2010, she was artist in residence at Durham University’s Ogden Centre for Fundamental Physics, where she collaborated with scientists and created a Space-Time Laboratory.

In 2012, as ‘Maker in Residence’ at the Newcastle Centre for Life, she created ‘Make it to the Moon’, an interactive education experience, mainly for children, where they imagine setting up a colony on the Moon. These workshops also went to the London Science Museum, the British Science Festival and Arts Catalyst. Other projects include being a judge for NASA’s children’s art competition ‘Humans in Space’.

Always aiming to reach diverse groups, in 2013 space art projects and workshops include Durham Cathedral, Hexham Abbey, and Gateshead Library for the Festival of the North East. In 2014, she created a project with Royal Holloway University – Invisible to Visible, exploring Dark Matter, Extra Spatial Dimensions and CERN, through a series experimental art books and a large family workshop.