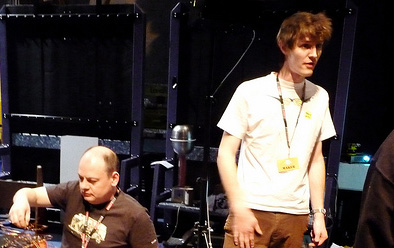 Maker Faire was the most open, buzzing, hearty, heart-warming, dazzling and jaw-dropping display of invention, innovation, creativity, geekery and genial eccentricity you could ever wish to come across. It was a hardware hacking fest of the highest order.

I was on the Make stand with my colleagues Graham Cameron, Simon Chappell, Alice Anderson and Josette Garcia. Between serving customers, we all got the chance to explore the fair, to take in the copious exhibits and marvel at the steady stream of thrilled attendees. There was a lovely scattering of old friends amid the ocean of people we didn’t know. I think I counted six people who spoke at Ignite in Leeds, five who spoke at Ignite London 2, plus I don’t know how many who had been at the Open Hardware Conference at Nesta in December.

But the heartening thing to see was the numerous parents and grandparents with kids, both boys and girls, all giddy at the idea of making something. I spoke to people who had travelled all the way from Spain and Germany just for the weekend (those of you who didn’t make it up to Newcastle from London because it was too far – shame on you! And those that did make it – wasn’t it worth it!) There were three generations of families wandering around, taking in the wonder of it all, sharing knowledge and enthusiasm in equal measure. Someone asked me if I knew whether Newcastle had a strong Maker scene going for it – looking round, we concluded that if it didn’t now, then in 5 years time, when all those kids with a soldering iron in their hands for the first time had grown up a bit, it certainly would have.

Alice and I bought ourselves a Maker kit each and spent more time than we could justify soldering and wire-stripping until we could call ourselves Entry Level Makers. Actually, Alice finished her musical pencil at least an hour before I completed my brain machine, so she clearly has Maker Chops. I claim I was slower because I was photo-documenting each step I took, but really, how long does it take to turn a camera on and off and shoot a few snaps? I have to conclude Alice has more aptitude for being a Maker than I do. Still, even though we were building kits someone else had put together, and even though we had adult supervision checking our work, (thanks, Mitch, Jimmie, Ken), we had great fun and felt great satisfaction when our contraptions worked.

So what is it about Maker Faire that appeals to people? It’s about seeing something tangible and real that you made with your own hands, and marveling that this object which didn’t exist two hours ago is there because *you made it*. It’s about taking control of your environment in a world where we’re encouraged to accept what we’re given. It’s about discovering the possibilities of the possible, as if with each solder connection, corresponding nodes in the brain join up and show the whole panoply of things that are available to us. It’s about validation for those people who have been out of step their whole lives that the tune they are hearing in their head is beautiful, and that those hours spent knee deep in microprocessors or code or chemicals was not a waste of time, but was a significant contribution toward building a world that is better than the one we have now, that the past was fun and interesting, and the present is exhilarating, but the future can be somewhere that is truly magical, and – more importantly than anything else – we’ll all be allowed to participate in it because the makers and hackers have given us the tools to do so.

It was impossible not to dream grand dreams at Maker Faire.

I was witness to the Maker Faire debut of Britain’s Premiere Steampunk band, Ghost Fire. Thoroughly enjoyable they were, too, and undoubtedly the best dressed band I’ve come across.

Thanks to every Maker there who took time to explain to me and thousands of others exactly what their contraption was, how it was built and why they thought it mattered. The gush of enthusiasm that welcomed us as we approached any given stall never waned throughout the whole weekend. Thanks ever so much to the organisers, who did a superb job putting Maker Faire on, including our own Graham Cameron. Graham took a fine array of snaps, which are up on the Maker Faire UK Flickr site. There are more of mine on the O’ReillyGMT Flickr site.

It just remains to anticipate next year’s Maker Faire. I can’t wait.