NHS – Past and Future Hack Days

Carl Reynolds tells us how important the NHS Hack Day was. This event took place on 26th and 27th May at the University of London Union, UK.In this post, Carl let us know not only what happened during the event but also tells us about the projects that are still worked on.

NHS Software Development Days (also called “Hack days” by software developers) are intense one- or two-day events that bring together a group of doctors, developers, designers, and other “geeks who love the NHS” to build exciting or off-the-wall prototypes that promote health. They show that digital technologies can be used to fashion tools overnight that can provide easy solutions to fight wicked issues, or pose real, disruptive challenges to the existing ways of working and thinking.

A doctor (seconded to the NHS Medical Director’s leadership scheme) with connections to the software development community was frustrated by the poor usability of software at work and his lack of influence over it and believed things could be organized much better, he discussed it with friends, and NHS Hack Day was born. 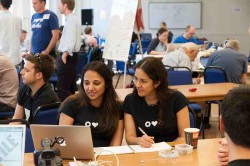 NHS Hack Day was organized using a benevolent dictator model with Carl as the dictator.

Carl used his own judgement to pick people cleverer than him to listen to, he liaised with a small core of esteemed hack day veterans for overall organizational advice/big decisions, but mostly left it to the community to work out the detail. NHS Right Care and the NHS information centre made the event possible by providing financial support, advice, and data. O’Reilly generously supported the event by donating books for prizes.

Among the people picked to listen to:

Any challenges that needed to be overcome?

Finding the time to organize it. The clash of cultures between software developers, doctors, and the NHS.

How were the challenges overcome?

Creating a community with the right ‘feel’ is hard. Pick who you delegate to carefully. Lots of detailed practical lessons around the logistics of running an NHS Hack Day.

What were the outputs from the day?