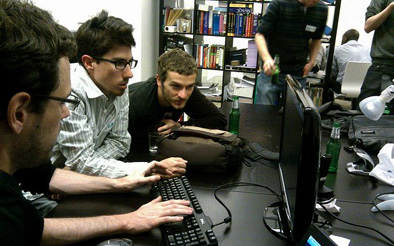 Nicholas Tollervey did a fantastic talk about Code Dojo at EuroPython. Josette asked Nicholas to tell us more about London Python Code Dojo:

A group of us got talking in the pub about how best to train to be a good developer. Jonathan Hartley described a dojo that Emily Bache ran at Europython 2009 and I talked about my training as a musician and work as a teacher prior to becoming a developer. The upshot was the very first dojo.

We originally used the information found at the http://codingdojo.org site but have since “forked” the concept and evolved it into something that suits our group.

Is it a model that any other group could take up?

It’s a model any other language based user group could use. It’s a great way to create focus in a meeting – too often I’ve been to user groups that have ended up being a bunch of geeks chatting over a beer or yet another round of lightning talks about pet projects. Each dojo is different so I’ve found people keep coming back for more. It’s also a great way to help introduce newbies to a community in a safe and un-intimidating way.

What advice can you give to other groups?

Concentrate, organise and don’t worry if things go wrong. Blindly following the dojo “recipe” won’t be helpful. It’s important to understand what is going on and, if necessary, change things to make the dojo work.

I’d add that any “learning activity” (like a dojo) should have a positive and evident change on those taking part. By “positive” I mean the attendee feels good about what they’ve been up to (it was useful, fun, enlightening in some way), by “evident” I mean they can demonstrate what they’ve learned (i.e. they’ve payed attention and incorporated stuff into their own practice as a developer) and by “change” I mean they’ve improved after having attended the dojo. Getting all these elements right takes time, experimentation and lots of mistakes (and is itself a useful learning exercise for those taking part).

Finally, make it fun… it’s hard to learn anything when bored, miserable or grumpy (I’m sure *everyone* can think of lessons at school that prove this point).

What longer term benefits did you see in your group?

I hope those of us who attend regularly have seen improvements in their practice as developers.

In addition to the educational benefits, running a dojo is a great means of light-weight community building and it’s great to put online-names to real-life faces. Some people have found work for each other through the dojo and others have collaborated on open-source projects together.

Do you know any other groups using this Code Dojo template? You might want to give us a few names throughout Europe, Middle East and Africa.

Emily Bache runs coding dojos all over the place. The original codingdojo.org website has a list of others. I know of or have attended Clojure, Scala and Ruby dojos in London.