Not the State of the Python Union

Back to Florence for EuroPython 2012 – Don’t be jealous – you would hate the heat! We are talking serious heat here between 35 and 40 degrees. 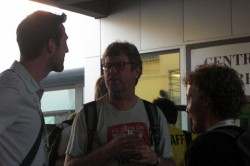 Monday morning started with a talk by Guido van Rossum “Not the State of the Python Union”. In this talk Guido answered some questions –

This talk was followed by Alex Martelli’s “Permission or Forgiveness”. Inspired by the Mother of Cobol, Rear Admiral Grace Murray Hopper ‘s motto “It’s easier to ask forgiveness than permission”.  I cannot argue with Alex’s recommendation of applying or not applying this motto in the Python environment but I would not recommend its application at home.

Other talks included all the buzzwords:

There are of course some more generic talks like –

The week was not just about talks but there was Coding Competitions – Python Challenge and Google EuroPython Code Jam. One should not forget the social side of the event with PyBeer, PyFiorentina, Tag Cocktails etc.

EuroPython (Florence) is one of the best organized conferences I know. Organized by Python Italia, Associazione di promozione sociale with a lot of support from Develer Srl.

Hope to see you there next year!