Office and Make/Craft Workshop worlds collide in DoES Liverpool

Just received this email from Hakim Cassimally – Hakim is well known in the Perl community but not many people know about his other interests.  Have a read about the other Hakim and DoES Liverpool.

I mentioned that I’d moved into a funky new office/workshop space in my last email, but here are some more details! 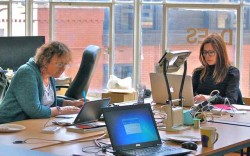 Ada Lovelace day at DoES

It turns out that having your office in a workshop isn’t such a bad idea after all. Over the last few months at DoES Liverpool (our new “co-working and maker community space”) I’ve found that the Makers of the 21st Century are more likely to be quietly soldering some components onto an Arduino board than they are to be making the occasional noise drilling.

When there’s a whirring noise, we usually look up to see if Bubblino has woken up. The little blue chap listens to twitter and blows bubbles when @DoESLiverpool is mentioned. Adrian McEwen, one of the DoES founders, built him to demonstrate some ideas about the Internet of Things, and often travels with him to tech conferences around Europe.

These days, Bubblino has competition in the office as other Things are taking shape. John McKerrell has been building location based clocks for some time, inspired by the Weasley clock from Harry Potter. We’ve had clocks in the office that tell us where the Mersey ferries are, and one that shows the location of John and his wife. He’s now building a simpler consumer version called the WhereDial, and is crowdfunding the development – he’ll start building as soon as he’s got 50 orders. 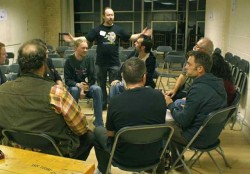 It’s great having a desk in an environment with creative and technical people: I’m in the small office to the side, but regularly move into the main space to chat about projects over a coffee and cake. Depending on who’s in we might talk about solving a problem with quadratic equations or version control, running the Liverpool Marathon, or whether it’s legal to keep chickens in your office. This kind of social integration is a big part of why I moved out of my living room “office”. Many of these people bring their interests to DoES by organizing events here in the evenings, not just geeky but also artsy: Beth runs her sewing club here; I’ve set up a speculative fiction writing group; and Chris Hough has started a very popular Lean Startups session.

As well as our permanent desks, we offer hotdesking. I’ve tried to work out of a café or library before, but finding a free desk and power socket and having to buy regular coffees to justify being there can be stressful and expensive. We started out with a gimmick of “first day hotdesking free if you bring cake” but we’ve found that it’s so good for breaking the ice with new people that we’re keeping it. (Probably. It’s also bad for our waistlines…)