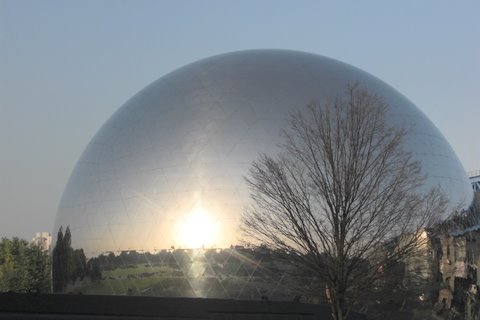 A fab weekend in Paris – no, this was not a holiday but a very good conference: OSDC France, which was held on 9th-10th October at la Cité des Sciences et de l’Industrie, La Villette, Paris, near la Géode.

What is different about OSDC (Open Source Developers Conference)?
OSDC is a meeting of developers from the different communities who create innovative open source programming. The goal being: it is no longer time to distrust each other, it is now time to learn from each other, as many concepts and techniques are not tied to a specific language. Another good feature about OSDC – it is free and open to all!

This year, OSDC was organised by les Mongueurs de Perl, AFPy (Association Francophone Python), Ruby France and the European Smalltalk User Group. The conference was divided into tracks: Communities, Web Development, Languages, Methodologies, Tools and Lightning talks. If you couldn’t make it to the conference, some of the talks will be made available, check the news on the conference website.

Are you an Open Source Developer? Don’t miss next year’s OSDC – it is a very friendly conference where you will learn lots of new techniques and in particular network with different communities who might use different technologies but will bring you a lot of new tools. If you are interested in attending, follow twitter.com/osdcfr.

The social side of OSDC is also very important. A GitHub Drinkup was organised as well as a couscous dinner and on the pavement drink up of the Perl Chartreuse, I am told a custom dating way back.