At the weekend I had the pleasure of hosting the 4th annual PHP North West conference in our new venue at Manchester Mercure hotel.  Hard to believe we’ve done this four times already, and quite a shock to look out at the crowd which this year was over 400-strong!  As a host, I see everything and nothing of the event, but there’s a few highlights I would really like to share.

This year was the first time that we included a tutorial day as part of the conference; basically we grabbed some people we thought were interesting and would be in Manchester for the conference, and set aside slots for them to spend either a half day or a whole day delivering an in-depth topic in an interactive way.  These were small sessions which meant that the attendees got the chance to ask detailed questions and spend time individually with the tutors.  I taught one of these sessions (web services is one of my favourite tutorials to give) and the crowd in my session were great and we had a lovely afternoon covering various aspects of web services and trying things out. 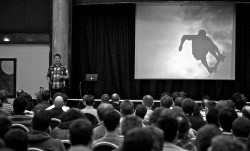 The audience watches Ian Barber open his keynote with a story about skateboarding. Photo by Stuart Herbert.

We kicked off Saturday morning with a truly inspirational keynote from Ian Barber entitled “Standing on the Shoulders of Giants“.  It is hard to do this talk justice with just a few sentences, the feedback on joind.in pretty much sums it up though, and you can watch the video when we release it!  This talk basically set the room buzzing and also set the mood for the rest of the conference.  PHP North West is a regional conference, and this year it was bigger than ever with 1.5 days of three tracks of content, plus an unconference.  We had speakers from the local area, Europe, and beyond – some of them are stars of the PHP world, others are almost unknown (although I suspect some are stars of the future).  With such a mix of topics, speakers, and attendees, it was great to see so much excitement and energy, people just geeking out with their new-found friends.  We had some great exhibitors there, most of whom seemed to be recruiting, and the O’Reilly book stand caused some major traffic jams because it was so popular that nobody could squeeze past the crowds :)

The unconference was a new addition to the conference this year, although we’ve done an informal track in the past.  So many interesting folk come together in Manchester when the conference is on, and we wanted to set aside some space for things that we hadn’t thought of.  In this we weren’t disappointed!  The unconference was a hive of activity, as it had shorter talk slots so there were a lot of taster talks, with more detail being given in the hallway or the bar afterwards!

PHP North West has always aimed to be a regional conference, affordable for an average person even without corporate funding, and to include as many people as we possibly can.  With such a mix of presence, from London companies having sent their own dev team, to local students and freelancers who had come along without knowing anyone else that would be there, it was a genuine pleasure to see everyone taking something different from it and generally joining in with proceedings.  We have a thriving user group in Manchester and I’m looking to another year of monthly meetings as we recover from this event and plan the next one!