Ruby, Ruby on Rails latest – Who is behind the Scottish Ruby Conference?

Why is the Scottish Ruby Conference  so popular – is it Edinburgh? Is it the whisky? Or is it because of the dads? Read on and find out who is behind the conference. I manage to get responses from two of the organizers, which is pretty good going since they are supposed to put up the next show in June 29th-30th.

Who are you? What do you do?

My name is Alan Francis and I work for LivingSocial in Scotland and Washington, DC.  At the moment I build iOS and Ruby apps for the sales team.

I’m Graeme Mathieson and I’m currently working for FreeAgent  here in Edinburgh, Scotland, which provides an online accounting system designed specifically for freelancers and small businesses. My focus in FreeAgent is on maintaining and enhancing the core accounting engine which is, naturally, built in Ruby.

How did you get into technology?

My dad brought home a Sinclair ZX81 (1K RAM!) when I was about 10.  He was using it for an Open University course but I loved playing with it.  I started writing games for it and graduated to a Sinclair ZX Spectrum (48K!) and then an Amstrad PC when they became available.

When the time came to fill out my University application form, I’d just been to visit a friend who was studying Computer Science at Stirling University.  He seemed to be having a good time and so I applied for CS courses.  I ended up at Napier University and was taught COBOL and C.  I taught myself C++ and that’s the point, I think where I started to really get into what I was doing.

My dad (it’s always the dad’s fault, right?) was a maths teacher at a nearby high school. He’d regularly bring home a BBC Model B at weekends and over holidays. As with most kids, I started out playing games (Chuckie Egg, the Repton series and Donkey Kong still bring back fond memories), but then I started wondering how I could build these sorts of things myself.

I remember spending long Saturdays with my dad reading code printed in Acorn User, while I typed it in, and my mum (who’s not a programmer by any means, but a great proof reader!) would spot the errors. Hours of effort to play a simple game — not quite like downloading the latest title from Steam! — but it was awesome. Then I’d tinker, modify the game’s source code, change the behaviour a little, see what happened.

I guess is all just carried on from there…

How did you get into Ruby/Ruby on Rails?

a) In 2001 I joined a US company called ObjectMentor doing training and consulting in Extreme Programming (the term Agile hadn’t quite been invented yet).  One of my students there was a guy called Chad Fowler.  We stayed in touch.  He ended up being quite a big name in the Ruby community.

b) I’d loved Dave Thomas and Andy Hunt’s book “The Pragmatic Programmer” and their next book (in 2001) was the first edition of “The Ruby Programming Language”.  Hadn’t used the language but I liked the writing style.

d) In 2005 I was at ThoughtWorks in Australia and Jon Tirsen started talking about Rails.  Rails was really the “killer app” that convinced me (and a lot of other people) to get into Ruby.

I’m a relative newcomer to web development; up ’til 2004, I’d been doing embedded development in C/C++. I took a job building a web app in Python with the Zope web app framework, which was probably the best (only?) Python web framework at the time.

After a year or so battling with Zope, I bumped into an early release of Ruby on Rails. It immediately solved a whole bunch of pain points I’d been suffering with Zope — built in database migrations, a proper object/relational mapper (which doesn’t suit all problem domains, but would have in this case) and a much easier deployment story. I prototyped a replacement to our existing Python code based in Ruby on Rails over a weekend and presented it to the management team. They didn’t go for it, but I was so sure that Ruby was the way forward that I quit and started my own Rails consultancy, Rubaidh.

Rubaidh was a clever, but terrible, name for a consultancy. It’s Scots Gaelic for “Ruby”, which gave me the neat tagline of “Scottish for Ruby [on Rails]”. Trouble is, nobody could spell it or pronounce it, and Google kept asking if it was a typo for “rubbish”! Still, I managed to develop a good enough reputation that I was kept busy with Ruby projects for the next few years.

In 2008 you organised Scotland on Rails. What prompted it? 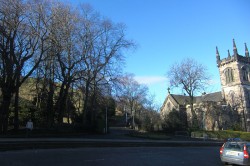 At RailsConf Europe in 2006 Dave Thomas showed the Paris on Rails logo and I liked it.  I asked a friend to design me a “Scotland on Rails” logo using the St Andrews Cross.  To show the logo off I registered a scotlandonrails.com domain.  I had no idea if it would be a user group, a blog or my own consulting company (I was self employed at this point).

When the local Scottish Ruby Group decided to hold a small one-day conference we figured we’d just use the name and logo for that.  It was a Ruby conference, not Rails specifically, but the name was catchy so we figured why not?

The original idea was just a “get together” where we all presented to each other…but I asked Chad to come over and “keynote” it.  Everything kind of snowballed from there and a lot of my US friends were keen to come (because Scotland is cool!).  Before we knew what was happening we had all kinds of well-known speakers.

I started the Scottish Ruby User Group in 2007 because I wanted to go to the pub and chat with other people that used Ruby. At one of the pub meetings — after several beers, I’m sure — we got talking about holding a one-day event to get Ruby people from all over Scotland together (despite it being the “Scottish” Ruby User Group, it was largely Edinburgh-based). Alan had a domain and logo ready to go already, so we ran with it. It turned out to be something much bigger — and better — than we expected!

From Scotland on Rails to the Scottish Ruby Conference – why this change of emphasis?

As Alan says, we were always a Ruby conference, we’d just attached ourselves to the conveniently registered domain name. However, the perception was (naturally) that we were specifically a Rails conference and we wanted to correct that. 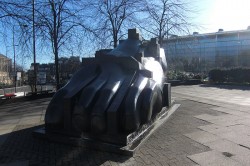 How do you explain the popularity of the Scottish Ruby Conference? Today (23rd January) there are only 14 tickets left for purchase – that’s almost sold out 5 months before the event.

Edinburgh is very much a destination city.  It was supposed to be a local conference but it’s ended up mostly replacing the O’Reilly RailsConf Europe, which kind of disappeared.  It is the biggest Ruby conference in Europe, I think.

I’m sure it’s nothing to do with the conference, and all to do with it being in Edinburgh, Scotland. :-) We’re lucky being in a city (and country) that people just love to visit. I know a lot of our attendees take the opportunity to extend their stay for a week or two and explore the rest of the country. I gather whisky is quite a draw, too.

Where do the attendees come from?

All over.  We regularly have many speakers and attendees from the UK, Europe, and the US.  We’ve had people come from Japan, Australia, New Zealand and South Africa.

Most languages have several frameworks, are there any competitors to Rails?

Only smaller things like Sinatra.  The big competitor Merb was merged with Rails for Rails 3.

There are a bunch of modular building blocks that make up Rails, and one of the bits it leverages is Rack, a generic way of plugging web servers (Thin, Mongrel, Unicorn, etc.) into web development frameworks. This is awesome because it means you can choose the right framework for the right bit of your app. There are a few to choose from including Sinatra, Camping and Ramaze.

To me, though, the really interesting alternatives are the EventMachine-based asynchronous ones: Goliath and Cramp.

I often hear people comparing Ruby on Rails to PHP – I always thought that PHP is a language and Ruby on Rails a framework, so how can they be compared and why?

They’re both ways to make web apps.  It’s possible to make a basic webapp in PHP with no framework and people did.  Not many people built webapps in Ruby without Rails.

Ruby is the language and Rails is a web development framework, in the same way as PHP is the language and, say, Cake, is the web development framework. The key difference from that perspective is that loads of people seem to develop in PHP without the aid of a framework or, when they realise they need a better structure, invent their own framework. If Apache had shipped with a mod_ruby that allowed it to serve ERB templates directly, the same might have been true of Ruby!

A few years ago, everybody was talking about Rails, the hype seems to have slow down. Can you say why? 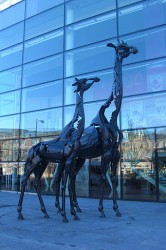 I have a long and boring theory about that.  I think these ideas in computing move in cycles, all attempting to tackle the problem of “better software” from different angles.  We had Objects, Design Patterns, Agile, Rails and the same people moved through them… you see the same names in the Design Patterns movement of the 80s moving into Agile and then into Ruby/Rails.

Each time the new “thing” makes a big wave and over time we ride that as far as we can until it is not making thing much better.  At that point, the hivemind shifts to another vector.  We’ve had language (Smalltalk), Design (OO/Patterns), Process (XP/Agile) then language again (Ruby/Rails).  The next *big* thing might be design again (functional vs OO) or a new kind of process.  Who knows, but I think we know that we can’t “Make Software Better” by making incremental improvements to Rails any more.

Part of what attracted me to Rails in the first place was its simplicity — at the time I could keep most of the Rails source code in my head and happily hack on the core to suit my needs. In the past 7 years, though, it has grown and has become significantly more complex (because it’s solving problems for more people in more domains at larger scale). I think Alan’s idea of cycles fits in here, too: in the early days, I’m sure Java was a relatively “simple” way to build web applications. However, over time it grew in size and complexity as more people joined the community and wanted it to solve their corner cases. Then came Rails, which was simple and lots of people got excited about it.

I wonder what’s next? If it’s a Ruby web development framework, I bet it’s one of the asynchronous ones. Maybe it’ll be NodeJS? (Personally, I hope not — I’ve no real love for Javascript!

Now tell me – what make the Scottish Ruby Conference so successful?  Could it be just the hard work that Alan, Graeme and Paul (absent for this interview) do?