Helen’s portfolio is diverse and prolific. When we saw her at the Faire, she was exhibiting her eye-catching Dazzle Dress – a sculpted ball-gown made of high-vis materials, ‘fit for the Queen of the Moon’ (pictured left). She talked to Josette about rocketry, colonising the moon, and her artwork:

I make work inspired by rocketry, time travel and the extraordinary features of the Universe. Through mixed media art installations and large paintings, I produce work using astrophysics, and collaborate with scientists primarily from Durham University. These artworks are physical objects shown in transformed spaces as site-specific exhibitions, preferably in non-gallery venues. This line of work started in 2007 and led me into an exciting environment where science and art thrive together.

In 2010, Helen was the artist in residence at Durham University’s Ogden Centre for Fundamental Physics. Whilst there, she was inspired by real science, and invented fictional journeys across space. She created a Space-Time Laboratory which contained pseudo-objects like space souvenirs, protective eyewear, and The Kathedra, a Space-Time Throne. She has since exhibited the 11th Dimension, an installation made up of 11,000 glass lenses which has been shown in Durham Cathedral and NewBridge Project Open Studios. Recently, she has become increasingly interested in the Moon and the idea of its colonisation:

Over the last year, I have focused on the Moon, which has become the target for space exploration again, and now there are plans to colonise it. This project started last summer on an art residency at Meltdowns, where I set up a Lunar Laboratory. This included research, communication and creating artworks. Whilst there, I attended Kent University’s Space School and ran a Lunar Habitat workshop for children, and I ironically got to hold real Moon-rock whilst creating fake Moon-rock! Since then, I have developed the lunar theme by creating a new Moon Rocket painting (see detail below), 10m high, inspired by the Apollo/Saturn rocket. As a STEM ambassador, I run a series of  workshops for children entitled ‘Make it to the Moon‘, for a generation who may well witness this event, and I also run Smart Materials costume workshops. 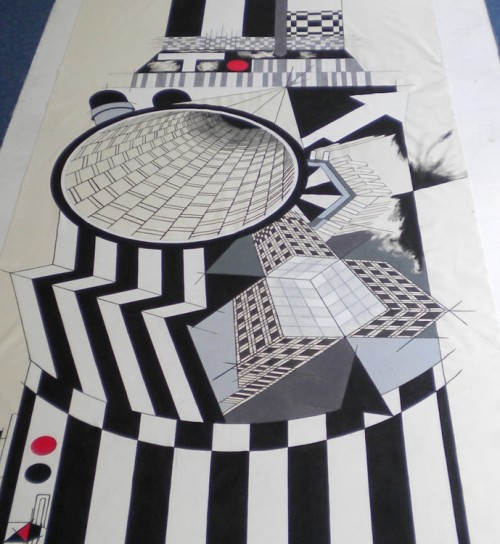 This project led to Helen becoming ‘Maker in Residence’ at The Centre for Life in Newcastle, the home of Maker Faire UK.  What’s next for Helen?

In 2012, I collaborated with Durham University’s NETPark on Undress:Redress, a Smart Materials costume residency and exhibition, designing and making UN-Dress (pictured on the left), the Rocket Dress and the Dazzle Dress, three flamboyant ball-gowns.  Two of the dresses are dissolvable and will be filmed whilst they disintegrate in water. My latest project is Moon-shot: First Woman on the Moon, which is an exhibition of large works inventing future lunar missions. These works include the Moon Rocket, a Lunar Space Station, a dynamic Full Moon, and quasi lunar artefacts.

Keep up to date with Helen’s latest projects by visiting her page on The Newbridge Project.