The Birth of the Dutch Android User Group

Johan Pelgrim is a Mobile Software Engineer, specialized in Android. Everybody who is working in the Mobile industry knows that the mobile world is a very dynamic and high demanding one. Besides his day-job Johan is a father of three kids with ages 1, 2 and 4 years, and yet in the fall of 2011 Johan thought it was a good idea to start the Dutch Android User Group. An interesting question is why he started the user group and this was his answer.

The timing was right.

There already were a couple of initiatives to start a Dutch Android user group in the past, but none made it through. When asking around some group leaders said there group is still active, but appeared to be pretty dormant in my opinion. There is a very active Mobile community in Amsterdam, but not one with a nationwide spread nor a sole Android focus. Last year The Netherlands had its first serious Android conference under the droidcon label and that triggered me to start the user group.

I sensed a lot of passion around me. 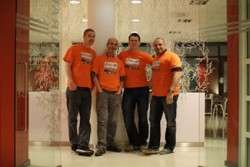 I didn’t want to do this all by myself. From the start I knew that people wouldn’t buy into my initiative if it was just me. Besides that, where would I find the time and sponsors to organize all this. I needed to gather a couple of enthousiastic people around me who shared my vision that starting this user group was a good idea and to give the leadership team a lot more body from the get go. I specifically searched people working at different companies and sollicited sponsorship from these companies as well, in terms of small payments and hosting of meetups. Within a couple of days Wiebe Elsinga and Arno den Hond joined me, followed by Dennis Geurts a few weeks later.

The launch at droidconNL november 2011

I was involved in the organisation of droidconNL in November 2011. All in all around 400 Android professionals visited the two-day conference and I had an opportunity to launch our initiative in a 10 minute pitch, just before the keynote by Nick Butcher, Android developer advocate at Google. I felt very lucky and Bill Mote, a good Android friend of mine, living in Cincinnatti and organizer of the “Cincinnatti Android Developers Group“, quoted Seneca, a Roman philosopher from the 1st century, saying: “Luck is what happens when preparation meets opportunity.” And he was right (both Bill and Seneca ;-). Of course I was lucky to be standing there, but it was an opportunity which I helped create. Richard Hyndmann, another Google Android developer advocate, posted a picture on his Google+ stream stating “The birth of something awesome”

Richard Hyndmann highlighting the awesomeness of our initiative

In the closing keynote Richard Hyndmann had a slide with a picture of me at my pitch and with an animation added a lot of android mascottes in the frame, stating I was not alone anymore. That helped sink in the idea that we had started something big and the group is growing steadily ever since. We had around 50 members the first month. That doubled in the second month and with that same pace, after just four months we recently welcomed our 200th member. When we started the user group we had no idea how big this was going to be, but seeing the steady growth I think we are heading for a great first year!

Our first meetup had the theme: “From idea to App” and we invited a User Interface (UI) / User eXperience (UX) desinger, an experienced Android Developer and someone with experience how to improve your app and make it visible in the Android Market. 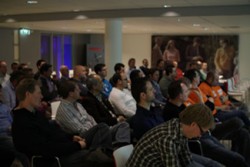 The audience at our first meetup

All in all we had around 65 people on our first meetup and we had a blast. Of course we had to get to know each other, since it was our first meetup, but during the walk-in, coffee- and dinner breaks and the barcamp – there was a buzz. Everbody was talking to each other and no one was left out. Everybody had a story to tell and was finding an eager audience to listen to their story and lard it with their own experiences and anekdotes. There was a lot of energy during the first meetup and maybe that was the biggest win for the first meetup and the user group, getting to know each other and share thoughts and ideas.

Nothing to loose, much to gain.

People tallking to each other during dinner

Yes, starting a user group and organizing meetups will cost you a bit of time, but in my opinion it doesn’t outweigh the enourmous positive energy and feedback you get in return. One of the members sent me an e-mail with the text: “Your enthousiams is working very contagious“. That was maybe the biggest compliment I could get and that is what is making me tick, help creating an environment where the Dutch Android professional can inspire and be inspired by others. Nothing more, nothing less.

Our future is looking pretty bright. I could have said pretty busy, but has a negative ring to it, in my opinion. Our first goal was to host bi-monthly meetups but we are now in the process of one per month. It’s hard to hold back all the enthousiasm of our members to host meetups or join external events. There is a lot happening in the mobile industry in the Netherlands and we are in the very middle of it!