What is Machine Learning?

When I introduce myself to people as one of the “machine learning” guys at Rangespan, most often people will follow up with “What is Machine Learning?”. It’s a good question so let me explain.

Machine Learning is about how we can make computers learn like humans do. Let’s take the example of learning language. Take a one year old toddler, she might hear this new word called “bird” when people point to an object in the sky and decide to start using it herself whenever she sees something in the sky (perhaps mistakenly when it was an airplane). What that toddler just did is remarkable; she didn’t just memorize or associate the word “bird” with the occasions in which she saw things in the sky previously, rather she discovered a pattern in how the word “bird” is used, and decided to use it in a similar but slightly different context.

This idea of using pattern recognition to make generalisations lies at the heart of machine learning. A classic example studied extensively in the academic community is hand written digit recognition. All hand written digits differ from each other in big or small ways. What we’d like to do is discover broad patterns to be able to automatically recognise hand written digits: e.g. a six looks a bit like a spiral, a four has no round bits, … We could try to have programmers encode these patterns in algorithms but a much more successful approach, pioneered by nature and rediscovered by the machine learning community, is to give a computer a few examples of hand written digits together with their labels and let it figure out what patterns are useful to distinguish different digits. “Machine learning people”‘s jobs are about inventing new algorithms that can learn patterns from existing data in order to generalize.

For this reason, machine learning is also a driving force behind the big data movement. When more data is available, most machine learning algorithms can more easily discover patterns and generalizations.

For the past few years I had done lots of machine learning research at Microsoft in Cambridge but in September last year I decided to join a startup in London. The first thing that struck me was the buzz at the various meetups that are organised in the city. It’s great to join a group of people to talk about a common topic.

When a friend in New York sent me an email late last year about a discussion they had at the New York Machine Learning Meetup I imagined how fun it would be to get some people together in London to talk machine learning. When we started contemplating the structure of the meetup we thought we could make the meetups even more interesting if we could bring people at the cutting edge of research (academics) with people at the cutting edge of practice (industry) in the same room.

So in February 2012 we kicked off the first meetup with Jedidia Francis (PhD student from Oxford) and David Singleton (Google). We organised that meet up in the dev room at Rangespan and when 25 people showed up, space got a bit tight. 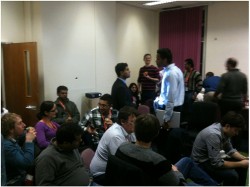 Six months and eight speakers later our group has grown to more than 300 people. We’ve had speakers talk about self driving cars, agents that learn how to play civilization from reading the manual, … We’ve learned about how machine learning systems are used at big organisations like Microsoft as well as at small startups like PeerIndex. We’ve been sponsored by PeerIndex, Forward Internet Group, VisualDNA, Rangespan and O’Reilly.

It’s quite clear that machine learning is hot, smoking hot. It’s exciting to see so many people wanting to learn machine learning and apply it to their application domain. I believe that there is no other place in the world where there is so much high quality machine learning happening than in and around London: with universities like UCL, Oxford, Cambridge, …, startups like PeerIndex, Last.FM, Rangespan, …, established companies like Microsoft, Google and all the hedge funds there is an almost unlimited supply of people who know machine learning as well as an unlimited demand for people who can work in machine learning.

If you want to help out by presenting your work and/or sponsoring the meetup, do get in touch. Otherwise, I look forward to meet all of you at the London Machine Learning Meetup soon!

Jurgen is a dev manager at the e-commerce startup called Rangespan where he is helping to build the biggest catalog and most competitive marketplace in the world. Before joining Rangespan Jurgen was a research scientist at Microsoft. As part of the Bing Personalization team, Jurgen invented new statistical models for predictive tasks and helped develop Bing’s recommendation engines. Jurgen has a PhD in Machine Learning from the University of Cambridge, an MSc in Computer Science from the University of Wisconsin-Madison, an MSc in Informatics from the Catholic University of Leuven, and was a Fulbright Scholar.