Why should I buy a book?

I remember hearing once that the average number of books per UK household was 2.5, one of which was usually a Bible. This statistic always shocked me (unsurprisingly, because it’s a complete fabrication it seems!)[1] – I grew up in a house full of books many hundreds, if not thousands of books – my mother was also a Librarian, so the idea of borrowing books from an even larger set than we had at home wasn’t an alien idea. Not all the books were new, in fact, even now I have, for my kids, books which have “Withdrawn from Camden Library” stamped on the inside – books which have been enjoyed by two generations of my family and who knows how many others whilst they were still in circulation. 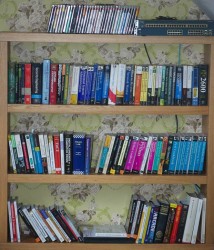 The bookshelf next to my desk - the smallest and least cluttered of 15 or so throughout the house - these are the books I'm using most often - or like the most - or mean to read sooner rather than later !

My own house now is full of books, despite the internet revolution and the two Kindles that we own (along with four smart phones, three laptops, three desktops and a tablet), our own collection numbers over two thousand books (I estimated this by counting books per shelf – followed by number of shelves. I really have no idea at all!). There is a subtle shift though from the house that I grew up in – whilst there nearly all the books were fiction, with a few reference books thrown in, ours are a roughly 50/50 split of reference and fiction, with my wife’s “Kitchen Porn” (cookbooks for the uninitiated) – accounting for a very delicious hundred or so.

My Kindle is dramatically different though, its contents are 95% fiction with one or two reference books thrown in (usually only where the Kindle price is significantly cheaper than the print price), I think that this is because, regardless of the ability to tag, comment or index e-books, there is nothing quite like a handwritten note in the margin or a post-it note sticking out the top. The tangibility of information is important to me in recall and understanding. And I’m not the only one, I bought a book for my other half, both electronically and physically – she read the electronic one until the physical one arrived and then switched – a few months later (after carting the reference book around on a project) she mislaid it, although the same information was still available in electronic form she felt that it wasn’t as good as the book – she knew where things were in the book. Cross referencing a given topic was almost habitual, she could almost open the book to the correct page without looking – she was quicker using paper than I could be searching the e-book. There is just something about books – a je ne sais quoi[2] – that is going to persist for many years to come, and I really hope that e-books aren’t squeezing the print publishers as much as I fear they might be.

This started out as a very long opening to what I actually intended to write about when I sat down – I went out to find the book in question and got caught up in reviewing the books on the shelf, as I always do – finding things that I’ve forgotten I own and want to revisit (in this case two books on Agile Development methodologies…). In any case I should get to the point!

I bought my first Computer Security book in 1993, when I was 15. I’d have a few Computer Books before that, mostly about programming, but when I heard about this book, I just had to have it. It was ironic, the book was already out of date and out of print for 4 years, but I had to get hold of it anyway. I went to our local bookshop – a cross between Aladdin’s den and Dr.Who’s tardis of second hand books down a back alley and their first hand shop slightly up the road the size of shoe box[3] – they found a copy for me and charged me £17.95 for the privilege (I’d like to claim that my memory is that good, but it’s written in pencil in the front cover) – to me that was a fortune, but at least it set a reasonable expectation for the cost of computing books for years to come!

The reason that I had to have the book in question was because it contained detailed instructions on how to write a virus – including sample code. It was controversial at the time, but is an early example of “full disclosure” – something I remain undecided about to this day – I want full disclosure to me, not so much to other people… It’s called “Computer Viruses – a high tech disease” by Ralph Burger. I can’t emphasise how much the book actually shaped me as a professional – it taught me pseudo code, it taught me ethics, it taught me a hell of a lot about the way that computers actually work and I developed a desire to learn a programming language that could operate at the lowest levels (C – in my case – I could never stomach Assembler). I’ve never written a virus (for the record, I never even typed in the code), although the concepts and ideas still fascinate me, and actually I think that it is that naughty excitement that still drives me as a security professional today.

What I know for sure though is that the book, the physical printed copy, is with me to this very day – I pick it up and can smell the paper and ink – it’s old and smells different to my copies of the “Perl Cookbook” (a book so dog eared that there is more ear than page) or my coffee stained “The Practice of Network and System Administration” – it is full of memories, ideals, ideas and dreams that, sadly, my Kindle will never retain – however hard it tries.

[1] After a little internet research with many unsubstantiated claims of averages I found the following paper “Family scholarly culture and educational success: Books and schooling in 27 nations”, M.D.R. Evans, Jonathan Kelley, Joanna Sikora, Donald J. Treiman – this carried out research over 31 countries (not including the UK). Hacking their findings to get a guestimate I found that on average a household will have about 114 books. However there are still about 9.5% of households worldwide than have none.

[2] Josette, I’m sorry, that’s my limit on the French nowadays …

[3] For reference it’s called the Albion Bookshop and is in Broadstairs in Kent.

Si Biles ( @si_biles ) is a consultant for Thinking Security in deepest darkest Oxfordshire, ‘cos he’s a CLAS consultant he spends quite a lot of time doing things for the Government, outside of that he has a particular interest in network security, vulnerability analysis, penetration testing and incident response & forensics. You can read more of his blogging on his own site  and on Forensic Focus.