YAPC::Europe is finished for another year!

After a very bad start (difficulties in getting to the airport, delayed flight etc.) I made it to Riga for the 12th YAPC:: Europe. A few weeks ago you read Dave Cross’ overview, now you can read my resume. First what is Perl? According to Wikipedia: “Perl is a high-level, general-purpose, interpreted, dynamic programming language…..” but I prefer the other description  “Perl is nicknamed “the Swiss Army chainsaw of programming languages” due to its flexibility and power.”

As I am sure you are aware YAPC::Europe stands for Yet Another Perl Conference in Europe but please do not ask me why there is a double colon I do not have a clue. Will need to ask a Perl person. I was very happy to be invited once again to this meeting – it is nice to renew contact with some old friends. I will name some of the key people who came to Riga – sorry guys if you are not named does not mean that I forgot you – it would be just too boring to list everybody.

Larry and Gloria Wall – Larry founded Perl in 1987 – yes perl is almost 24 years old and there is still a lot of life in it. Larry is now working on Perl 6 which appears to be the longest gestation around but I am told that it is possible to use Perl 6 now. Gloria is for ever supporting him – I have the feeling that no Gloria no Larry!

brian d foy who started the Perl Mongers or as we say in French les mongueurs de Perl. Brian is also the author of several books including the 6th edition of Learning Perl which has just been published and founder of the White Camel.

Damian Conway – all the way from Australia, still one of the funniest speakers around but also author of several books including Perl Best Practices, Perl Hacks. Damian is also the tireless trainer from Thoughtstream and maybe mostly known for his contributions to CPAN and his work on Perl 6.

Dave Cross, founder and chair of the London pm for a long time, author of two books including The Perl Template Toolkit. For the last 3 years Dave has given some training at YAPC and this year was no exception. If my maths are correct that makes it 4 years of training – not bad Dave – I am sure you can do better.

Jesse Vincent, author of RT Essentials, lots of CPAN Modules etc. Last time I talked about Perl to Jesse, about a year ago, he told me that he was in charge of the development of Perl 5. I don’t know if he still the coordinator but I have to admit that new releases of Perl 5 are coming fast.

Mark Keating who, I believe, is now in charge of marketing for the Perl Foundation or is it only for the European side of it – I am not sure but Mark said that he would write a post for this blog to let us know what he is up to. As well as being MD for Shadowcat Ltd, Mark also singly organise the London Perl Workshop.

Philippe Bruhat – key person among the French and International Community, translator of perl books and winner of the White Camel two years ago.

Brian and Sam McCauley – I am not sure what is the involvement of Brian with Perl but I would like to thank both Brian and Sam for being so good to me when my luggage was lost by Air Baltic – Brian lent me a plugboard so that I could recharge my phone etc. and Sam offered to lend me some clothes. It was very kind and very much appreciated. Thank you guys. 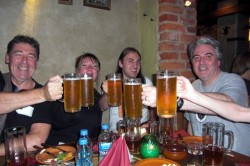 Andrei Shitov who organized YAPC remotely. Andrei was the head of the Moscow pm but now moved to Amsterdam to work for booking.com – the online hotel booking service and also one of the most important employer of Perl developers. Booking.com is also a very big sponsor of YAPC.

I forgot to say that next YAPC will be held in Frankfurt… Unfortunately, I won’t be there.

Riga with its 700 000+ inhabitants is the largest city of the Baltic States. Might be the largest city of the area but it is so small. The old city with its paved streets is rather beautiful with lots of Museums (Art Nouveau, Medicine, Art, Film, Porcelaine, Natural History and many more). The history of Riga and Latvia is very long and not always pleasant as Latvia was occupied for centuries. The influence of the occuppying countries can be felt throughout. Since the break up of the USSR, Latvia joined the EU and became one of the fastest growing countries, unfortunately the growth slowed down lately due to the international recession but I believe Riga is still one of the top town for “Stag Parties”. 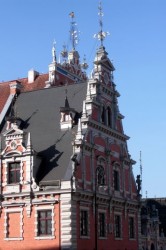 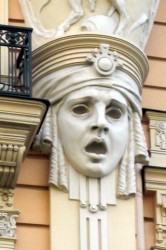 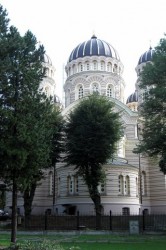 I did what most tourists do but at high speed so please forgive the bad photography – hopefully it will give you an idea of the city.

Thank you Diana for helping me find  the best places in Riga.